A recent session with a client took an interesting turn, and I thought it would be fun for you to read about it from not only my perspective but from my client’s as well!

From my perspective as the healer:

About halfway into a recent session with my client V, I began to focus on her first chakra also known as the root chakra. This is located between the pubic bone and tailbone. It’s the energy center for several aspects of life your personal safety, identity, personal power, the will to live, ones fire or spark, … just to name a few.

While working with a client, I always ‘listen’ to body and let the body lead. This is even more important when working with the first chakra. Because this chakra is the energy center for safety and personal power it’s imperative that the client’s chakra take the lead. Therefore, I connected with her first chakra and asked what it needed. After a little while I received a response in the form of a vision. The vision was of a little girl. I could sense that she (the little girl) didn’t want me to engage with her but also didn’t want me to leave. So I remained connected and ‘held the space’ as we say in this field. 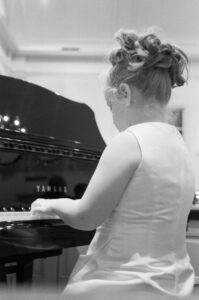 Once comfortable the little girl came up to me and grabbed my hand, leading me down into her room where there was a piano. She sat and began to play. It was clear that what she wanted was for me to see her, to hear her and most importantly to acknowledge her for all the bravery, skill, and determination it takes to play the piano. She wanted to truly be SEEN.

In my interpretation of the vision (the body’s response to my question of ‘what do you need?’) I wasn’t sure if the vision was symbolically or literally demonstrating the need to be seen, heard and acknowledged. When I asked my client V if she played an instrument she said that as a child she played the piano. She said she hadn’t played in years but was recently thinking about playing again. I was struck very deeply by this. The honor of her chakra system showing me such a very literal vision and asking me to be a witness to this powerful self expression was overwhelming. Her chakra system was not only confirming her thoughts to start playing the piano again but also provided greater insight into her deeper needs associated with playing. I stayed connected to the vision and her chakra and provided the support and recognition needed.

From my client V’s perspective and how going back to the piano is reclaiming her passion:

During a recent session, Kristie suddenly asked me out of the blue if I played a musical instrument and I told her I had played piano as a child. She told me that she had an image of a young girl taking her by the hand and asking her to listen to her play piano. Was that girl me? I don’t know, but I thought it was pretty cool that she had sensed the presence of a piano in my life and by extension, my desire to play it.

I’ve always loved music, although I’ve never considered myself musical. I took piano lessons as a child. Like a lot of kids, I did it because my mom made me. My teacher seemed old (although now that I think about it, she was probably in her 40s), was stern and her name was Mrs. Blood, a name that’s hard not to joke about when you’re a kid.

After a few years, I finally convinced my mom to let me quit. Although I never played an instrument again, I grew to really love music and in my 20s and 30s, I amassed a sizable record and CD collection. I was always on the lookout for new music.

Then I got married, and my husband, now ex-, was really musical. He played a variety of string instruments — guitar, bouzouki, banjo — and had a beautiful singing voice. He also had a huge CD collection, and always dominated our sound system, playing his own music non-stop. I gave up on playing my own music. It’s not that he wouldn’t let me play my own music, it’s just that he was very passionate about music and always playing his own stuff. He also talked about music quite often, so I just let him take over as head of the music department in our home. Music was his thing, and I stopped listening to my own for much of our marriage.

About 12 or so years into our marriage, our two kids were now playing musical instruments so I was the only one in our family who didn’t play one. I commented about this a few times, so for Xmas one year, my husband bought me a really nice electric piano. I got my old piano books from my parents’ house, watched YouTube videos and started teaching myself again. But life got in the way— our divorce, issues with our younger son — so I stopped playing.

But once I was divorced, I reclaimed my love of music. I subscribed to Spotify and started discovering all sorts of new-to-me artists, making playlists, etc. And my first boyfriend after my divorce was a singer-songwriter.

I recently moved into my own place, a small, sun-filled apartment, and my piano fits perfectly into a corner of my living room. I haven’t started playing it again, but I look at it often and think “I have to start playing again!” I know I will.

From my perspective once more:

You can see how the first chakra being about personal power and your own unique spark was the perfect placement for this vision! This vision was her body shouting a resounding YES to her thoughts of playing piano again, of reclaiming her musical spark and her passion for music!!

Hope you enjoyed this article!

From my heart to yours,

How I Got Started Doing this Wonderful Work